Whether dry water or skin that does not get wet, batteries made of foil or fire made of batteries, vegetables for the tank or an umbrella for the heart: with good photo technology, photos explain technical innovations better.

Organ Printer: At the Fraunhofer Institute for Manufacturing Engineering and Automation IPA research is being conducted on a printer for organic material.

Organ Printer development at the at the Fraunhofer Institute for Manufacturing Engineering and Automation IPA.

Dry water is produced by combining water with quartz and is used in the cosmetics industry. It can also bind dasTreibhausgas CO2.

The Swiss pilot of a Russian Kamov Ka-32 heavy-duty helicopter looks down when attaching the load.

A lift helicopter helps with the installation of a barrel-heavy DVB-T transmission antenna at the top of the radio tower at the Stuttgart Frauenkopf.

Independent emergency power devices in the basement of a computer centre.

A large fuel cell at a server farm of T-Systems in Munic delivers electric power and heat.

Solar architect Rolf Disch over the rooftops of its Solar Settlement in Freiburg.

In geo-caching, a hidden container is searched by GPS for items contained in it and exchanged for new ones. For this purpose, documentations of the visits and finds are kept on the Internet.

Geo-Caching is a modern variant of scavenger hunting.

The wind-driven Ventomobile of the University of Stuttgart reaches a speed of 66 percent on level ground of the wind that drives it.

The wind driven Ventomobil of the University of Stuttgart during a test drive.

This EnBW coal power plant in Altbach, Deizisau has an efficiency of 43.8 percent.

Photomontage for a press release on a video-conference system.

A composite photo shows business people in a video-conference room.

Portrait of an employee in the T-Gallery.

Portrait of an employee in the T-Gallery.

This bionic grip of Festo AG in Esslingen is able to grasp very sensitive.

Bionic grip of Festo AG in Esslingen with human hand.

The research aircraft Antares DLR is powered by fuel cells.

The batteries of electric vehicles can accommodate the excess power generated by wind power plants at night.

innovative 18-speed bicycle transmission from Pinion, integrated in the crankshaft.

Experimental setup for a dynamic stability test of a femoral component

Experiment setup for the dynamic stability test of a part of a knee joint prosthesis.

Volkswagen and Lichtblick show their power plant for home use on a trade fair.

VW and Lichtblick show their power plant for home at an public event.

Visitors with 3D-tracking-spectacles enjoy a virtual 3d-display of a human body at the High Performance Computing Center Stuttgart (HLRS) of the University of Stuttgart.

Virtual 3d-display of a human body at the High Performance Computing Center Stuttgart (HLRS) of the University of Stuttgart.

Developed at the University of Stuttgart this wooden roof positions actively against the wind. Press picture for Bosch Rexroth AG.

Roof made of an active driven wooden framework.

The Etamax biogas plant produces gas from biological waste from the nearby wholesale market for gas vehicles.

Battery research at the Fraunhofer Institute for Chemical Technology ICT: Redox flow cell laboratory for testing new materials.The colors indicate the degree of oxidation and thus the charge state of the liquid.

3D fiber printer robot at the Fraunhofer Institute for Manufacturing Engineering and Automation IPA in Stuttgart-Vaihingen.

3D fiber printer robot at the Fraunhofer Institute for Manufacturing Engineering and Automation IPA in Stuttgart.

One of the newest data centers in Germany provides modern technology for reduced power consumption.

Sebastian Trimpe on the Balancing Cube, constructed together with Raffaello D'Andrea at ETH Zurich for research purposes.

Mixed construction waste is separated again into its components.

Mixed construction waste is separated into its components.

Water drops on the surface of the tropical swimming plant Salvinia molesta. Its structure binds air so it can't get wet.

Water drops on the water-repellent surface of the tropical swimming plant Salvinia molesta.

Such antennas for 5G mobile radio ensure fast communication between the vehicles on a test track on the A9 motorway.

Antenna for 5G mobile communication on the A9.

Atrial auricle which is used in stroke risk patients with atrial fibrillation to close the left auricle by catheter if the drug anticoagulation is not possible.

Atrial auricle occluder for the prevention of stroke.

Gauss project: Development of an electric motorcycle at the Technical University Darmstadt.

Visitors of a guided tour to the Internet of Things iOT demonstration plant at SAP SE in Walldorf.

Guided tour through an Internet of Things iOT demonstration plant at SAP SE in Walldorf.

Innovative experimental reactor of Grillo AG in Essen for the production of the liquid chemical raw material methanesulfonic acid (MSA) from methane, a main component of natural gas.

Experimental reactor for the production of methanesulfonic acid (MSA) from natural gas.

in this experimental reactor at Grillo AG, methanesulfonic acid (MSA) is extracted from natural gas.

Experimental reactor at Grillo AG for the extraction of methanesulfonic acid (MSA) from natural gas.

Construction of a Gaildorf wind power plant whose base is used as a water tank for a pumped storage power plant.

In the future laboratory of Schubert System Elektronik GmbH in Neuhausen ob Eck, new operating concepts for industrial machines are being researched.

Mobile radio antenna at Osram in Schwabmünchen for the control of an autonomous robot vehicle.

Dr. johannes Schemmel and Dr. Bjoern Kindler with an insertion frame for the BrainScaleS computer system at the University of Heidelberg, which simulates information processing in the brain.

Component of a brain-like computer.

Airship of the Zeppelin Luftschifftechnik in Friedrichshafen at Lake Constance, which is provided with the Telekom logo.

Airship of Zeppelin Luftschifftechnik in Friedrichshafen. 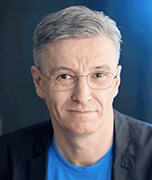 Being a photographer for corporate and editorial clients and content marketing agencies, I live from respectful curiosity and systematic improvisation with the use of newest technology. Unusual views, abstaining from the trivial and the rate of returning customers provide the energy for memorable pictures in – fortunately – many different genres.

To prevent infection, all processes are jointly optimised and defined in detail in advance of each project.